This timeline is a living document and a work in progress. Please email contributions or corrections to wcob@appstate.edu.

Appalachian State University began as Watauga Academy, founded in 1899 by Dr. B.B. Dougherty, his brother D.D. Dougherty, and D.D.’s wife, Lillie Shull Dougherty. They shared the dream of helping children in North Carolina’s “lost provinces” discover educational opportunity to match the splendor of the mountains in which they lived. This tiny academy quickly evolved into a school preparing quality teachers to serve our state and beyond. Building on this strong foundation, Appalachian grew into a destination of choice for high-achieving, intellectually curious students wanting to be engaged in the community.

Education in business was seen as a need from the very early years.

1946: A major in business education is offered

Business Education is offered as a major.

1957: A statewide expansion of higher education

The purpose of the school was expanded from a mission only to prepare teachers and staff in education. The new catalog now read "Appalachian provides an opportunity for students to acquire a liberal education ...and to prepare for teaching, school administration, and other professional careers and public services." Appalachian for the first time offered B.A. and B.S. degrees without teacher certifications.

1966: The Department of Economics and Business is created

Dr. Herbert W. Wey is named president and later chancellor, in 1971. The university became part of the University of North Carolina system in 1971 under the leadership of Dr. Wey (1969-79). He introduced innovations that earned Appalachian national recognition as an institution of change, all while enrollment doubled to about 9,500. Under his leadership, Appalachian implemented the student teacher program, College of Business, continuing education program and Watauga College, a small residential college within the greater university. It also secured the New York Loft and App House in Washington, D.C., for off-campus scholarly activities. To ensure the university’s continued innovation and success, Wey created the Appalachian State University Foundation Inc. to solicit support from individuals, corporations and businesses. Wey was a prolific writer and researcher. Peers referred to him as the “educational innovator” for encouraging faculty to develop and practice new theories of teaching and learning.

Dr. William V. Muse is named first Dean of the College of Business in April 1970.

1970: Appalachian's College of Business is founded

1971: Accounting and Economics Departments are formed

Dr. Richard Sorensen (1943-2020) became the second Dean of the College of Business. Dr. Sorensen was  instrumental in the development of the college. During his tenure, the college was named for John Walker, MBA and MS-Accounting degrees were developed, new departments were formed, initial AACSB accreditation was received, and the college grew significantly.

1975-76: John A. Walker as namesake for Walker Hall and the Walker College of Business

1976: The Walker College is accredited by AACSB International 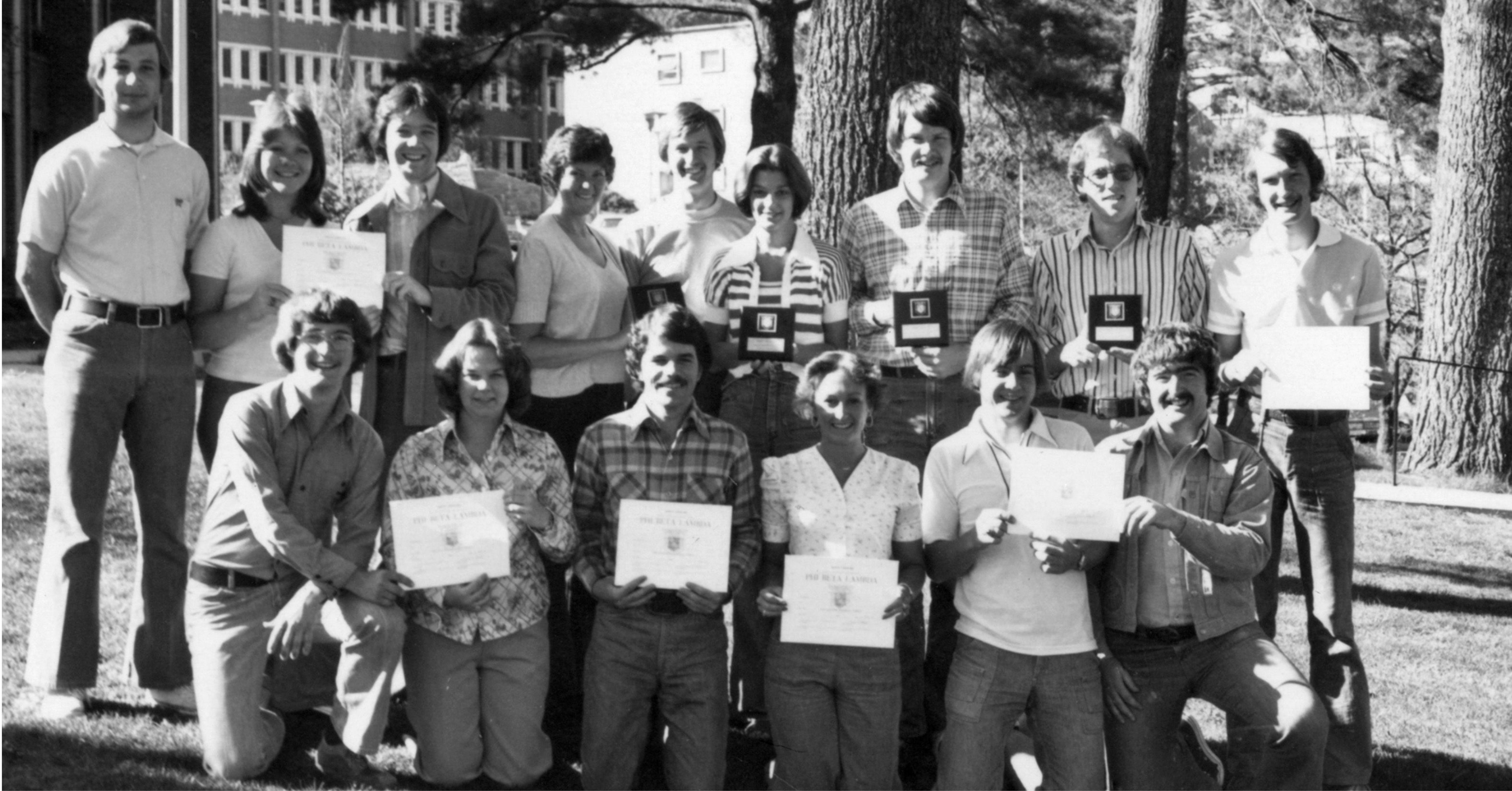 1977: The college launches an MBA program and a Computer Information Systems major 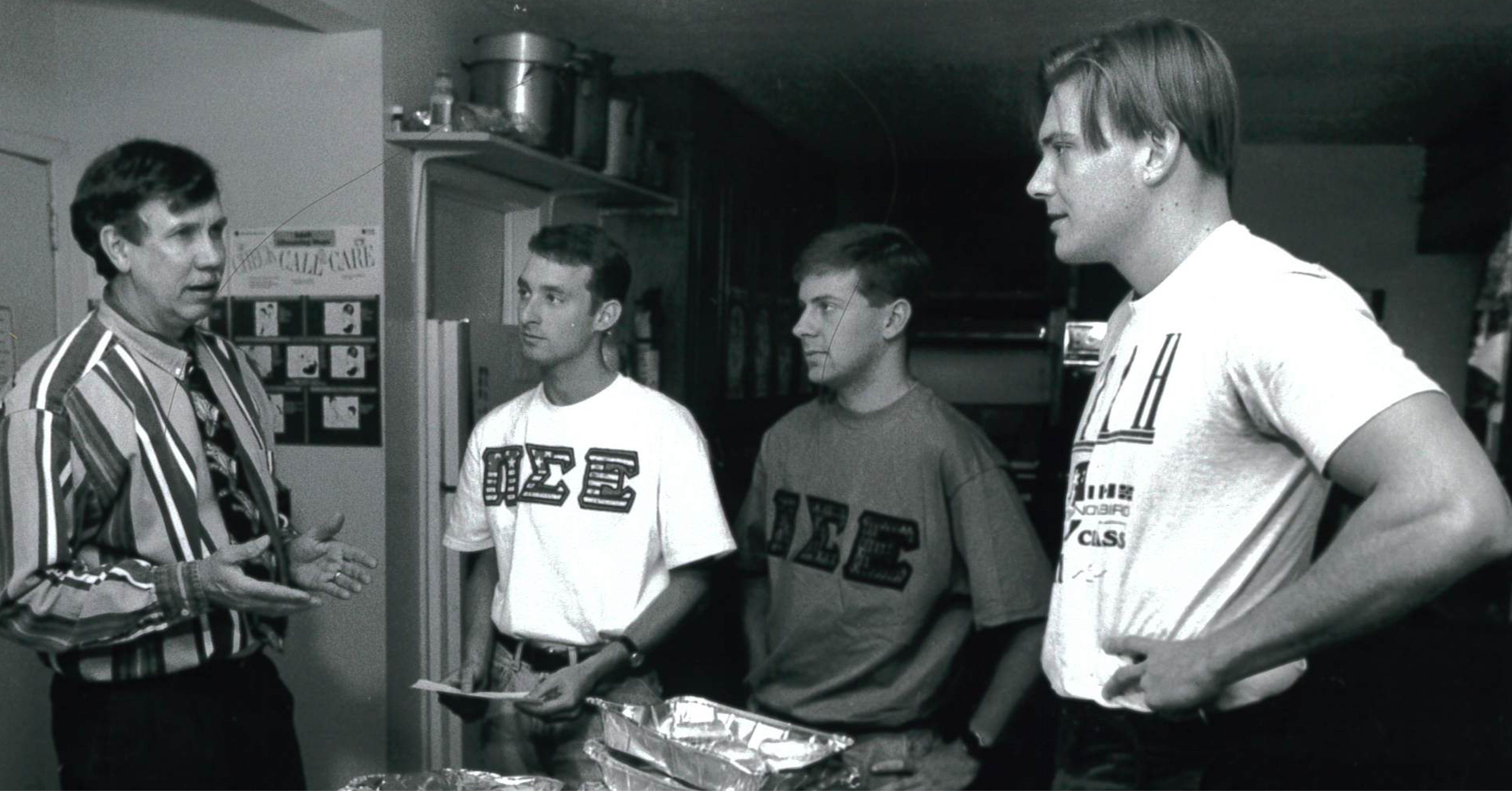 Dr. John E. Thomas (1979-93) recruited a first-rate faculty, believing that strong, effective teaching should be supported by research and community service. With a focus on improving campus technology and blending it into teaching, Thomas also developed Appalachian’s leadership in distance learning, which expanded in the late 1990s and early 2000s to include a formal partnership with 10 regional community colleges. Under Thomas’ leadership, Appalachian developed exchange programs in a dozen countries including China, Germany and Costa Rica. 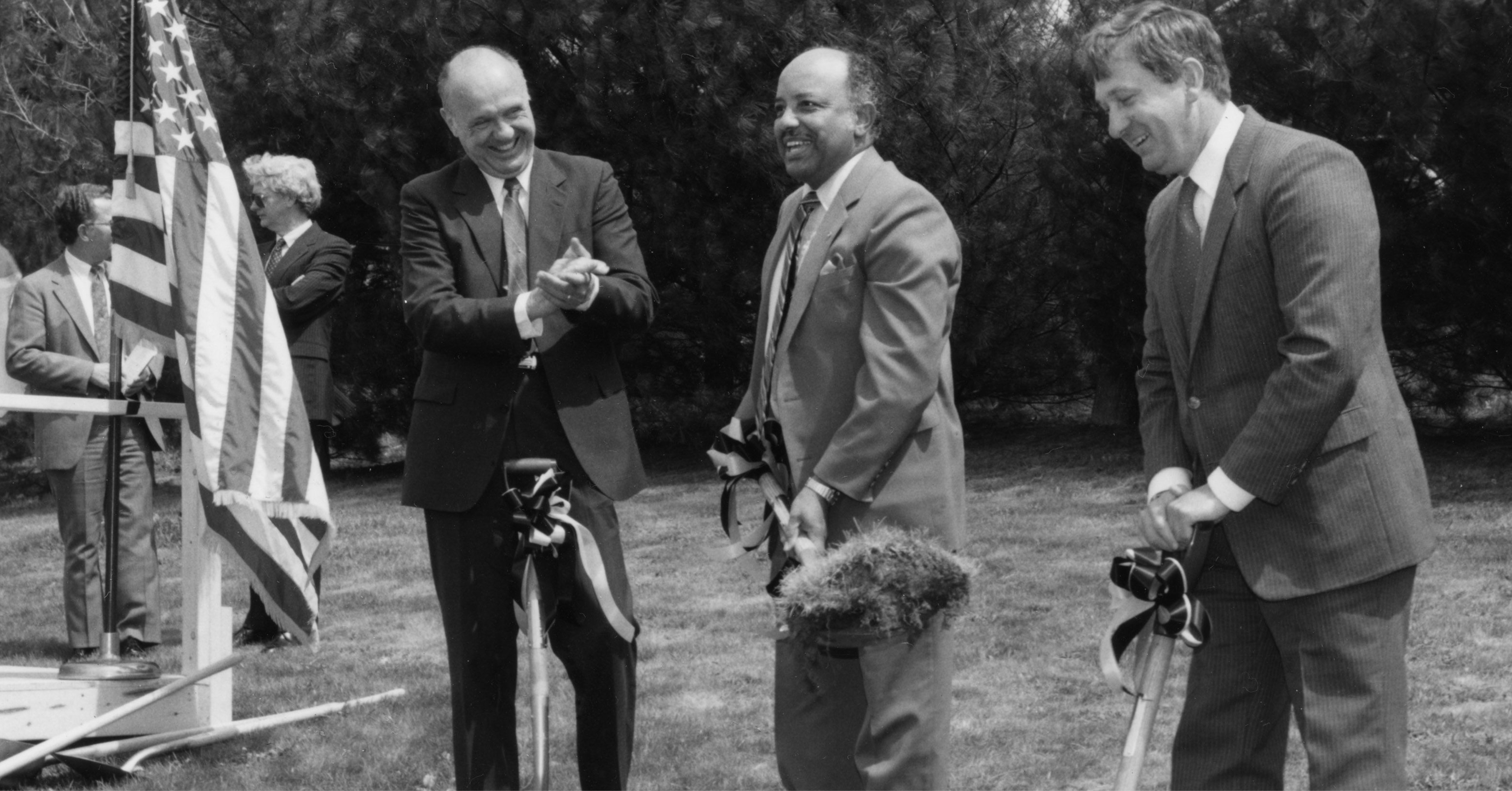 This image shows the groundbreaking ceremony for Thelma C. Raley Hall, completed 1990, at Appalachian State University (1967-current) in April 1988. Chancellor John E. Thomas (1979-1993) stands second from the left while Board of Trustee member Richard Davis holds a shovel-full of dirt and grass. College of Business Dean J. Paul Combs (1982-1989) stands on the right. Thelma C. Raley Hall houses the College of Business and Information Technology Services. From left to right are Dr. Harvey Durham, Vice Chancellor for Academic Affairs; Dr. Larry Keeter, Professor of Sociology and Mayor of Boone; Chancellor Thomas; Mr. Richard Davis, Chairman of the Board of Trustees, and Dr. Paul Combs, Dean of the College of Business.

1978: The college offers an MS in Accounting degree

The Master of Science in Accounting program was established.

The college began offering a BSBA in Restaurant, Hotel, and Resort Management, in 1985, which was renamed to Hospitality Management in 1987.

1988: Boyles and Brantley shape the future of the college 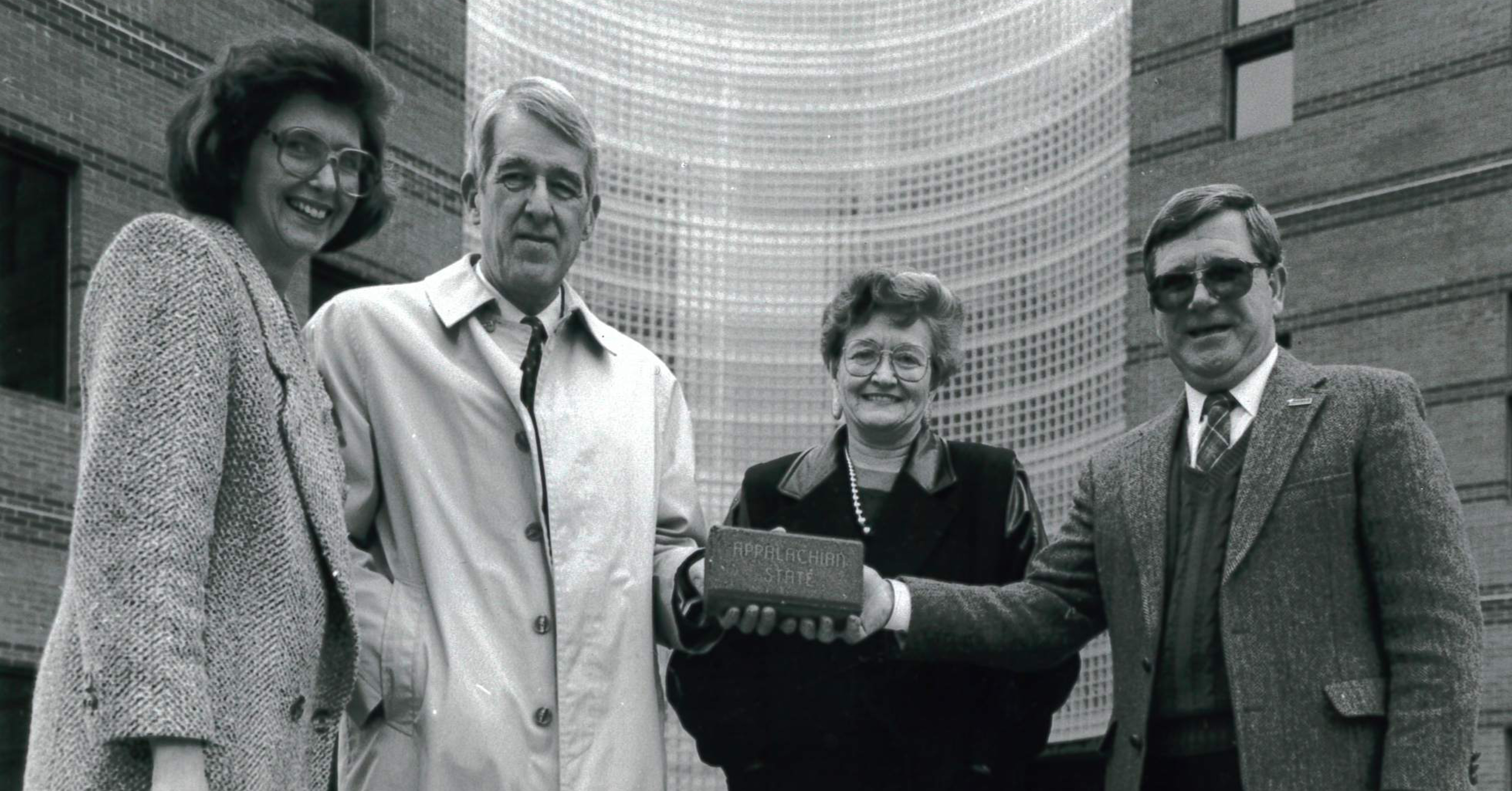 Dr. Kenneth E. Peacock, became the fifth Dean of the Walker College of Business. During Dr. Peacock's tenure, the Dean's Club, an annual giving society that supports key programming, students and faculty in the college was founded. Dr. Peacock later became Appalachian's sixth chancellor and, in June 2014, Raley Hall would be renamed Peacock Hall in his honor.

Appalachian's focus on international education continued with Dr. Francis T.Borkowski (1993-2003), who entered his chancellorship with a respectful vision: to create a distinctive learning environment sensitive to rapid world changes, such as technology and globalization, yet rooted in mountain values and Appalachian’s tradition of teaching, scholarship and service.

In 1995, Mr. G.A. Sywassink, Chairman and CEO of Standard Holding Corporation, funded an annual Day of Excellence to recognize faculty for their outstanding teaching, research and service. A long-time supporter of Appalachian, Mr. Sywassink is a former member and chair of the Business Advisory Council for the Walker College. He is past chair of Appalachian's Board of Trustees and a past member of the UNC System Board of Governors. A non-tenure track award was added in 2002; a staff excellence award was added in 2012, and two Sprit of Walker awards (one for faculty and another for staff) were added in 2018.

In May 2003, President Molly Broad appointed Dr. Harvey R. Durham as acting chancellor after 24 years of service as the university’s chief academic officer and 14 years prior as professor, department chair and associate vice chancellor. Dr. Durham served as acting chancellor for the school year 2003-04.

Dr. Lyle Schoenfeldt serves as acting dean of the Walker College of Business. Dr. Schoenfeldt joined Appalachian's faculty in the Department of Management in 1996 and was well known for a standard textbook on human resources. 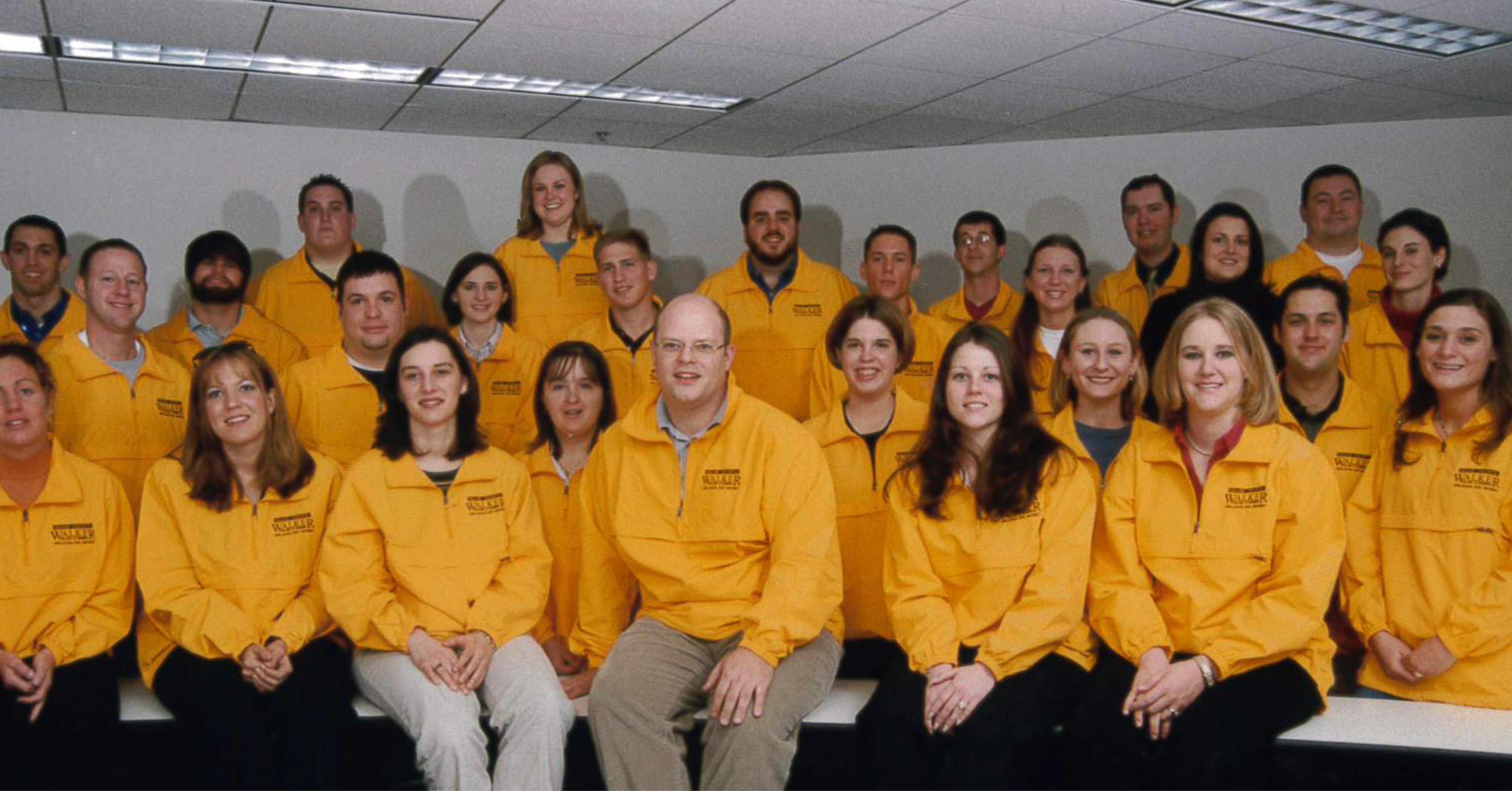 Under the leadership of Dr. Kenneth E. Peacock (2004-14), Appalachian became a destination of choice for high-achieving, intellectually curious students wanting to be engaged in the community. In addition to small classes and challenging academics, Appalachian became known for its undergraduate research, internationalized curriculum, service-learning and sustainability, both in academic programs and campus practices. The university grew significantly in the areas of healthcare and the nexus of energy, the environment and economics. It received increased national attention for its academics, as well as its three national NCAA football championships in 2005, 2006 and 2007.

The Martha Guy Summer Institute was established with twenty-two participants the first year. The business exploration program aimed to recruit top talent to Appalachian to major in business. Dr. Martha Guy (1922 - 2019) was an icon and pioneer for women in the banking industry. A native of Newland, Guy served and led Avery County Bank for more than 60 years in every capacity from assistant cashier to president. She was inducted into the North Carolina Banking Hall of Fame in 2010 and has been honored by the North Carolina Bankers Association with its Legends in Banking Award. In 2011, Guy received Appalachian's Honorary Alumni Award.

Dr. Randal K. (Randy) Edwards became the sixth Dean of the Walker College of Business. Previously, Dr. Edwards had served as chair of the Department of Accounting for 13 years, having first joined the business faculty in 1981. During Dr. Edwards' tenure, the Walker Fellows, a student ambassadorial group, was founded (2009). In 2014, Dean Edwards would be appointed chief of staff of Appalachian by the Office of the Chancellor, replacing Dr. Lorin Baumhover, who first held the position from 2005 to 2009 and again beginning in fall 2012 through June 2014. Then-Senior Associate Dean Heather Norris named Acting Dean of the Walker College of Business.

The Walker College launched a fully online BSBA degree program through the University’s Distance Education services in 201. The program would earn a high ranking from US News & World Report for Best Online Bachelor's in Business Programs in 2021.

2011: Career services get a boost from industry partners

At the time Dr. Sheri Everts joined Appalachian in July 2014, enrollment had topped 17,800 and the university was attracting international attention with its entry in the Solar Decathlon Europe 2014 competition in Versailles, France, and students’ exhibition of designs in the Milan Furniture Fair. Appalachian was also preparing to host its third annual Appalachian Energy Summit, at which leaders from North Carolina’s public and private universities convene to share best practices. On Chancellor Everts’ first day in office, Appalachian joined the NCAA’s Division I FBS, and in 2015, Mountaineer football brought home a record-setting win at the FBS Camellia Bowl. Under her leadership, Appalachian welcomed the most diverse first-year class in university history.

The college had its beginning as a department in the College of Fine and Applied Arts and was located on the top floor of Smith-Wright Hall. In 1971, the College of Business was established.

In 1976, the College of Business was relocated to a new 55,000 square-foot, three-story building and both the building and college were named for John A. Walker. At the time, the college included 53 faculty members and 1,600 undergraduate students, the largest undergraduate enrollment in the state of North Carolina. The building was utilized at full capacity, and between 1976 and 1983, the number of business degrees awarded increased by 71 percent and the number of faculty nearly doubled.

In 1985, funds for the initial design and planning of a new building for the college were appropriated by the North Carolina legislature. The groundbreaking was in April of 1988 and the building was completed in the summer of 1990.

John A. Walker, Namesake of the Walker College of Business

John Walker was a native of Pennsylvania and a graduate of Northwestern University. He was a businessman, philanthropist, and civic and community leader from North Wilkesboro, NC. Walker had served as president and was one of the founding directors of Lowe's Companies.

At the time of the naming of the college and building, Walker was Executive Vice-President for Sales and Profits of Lowe's Companies. In 1976, he donated $250,000 as the first major gift in the "Investment for Merit" campaign to raise $1.5 million for the college. This gift represented only the beginning of his long association with and enthusiastic commitment to the college. He remained active with fund-raising, assisted with faculty and student recruitment efforts and, at the time of his death in 1984, served as the chairperson of the college's Business Advisory Council.

Dr. Kenneth E. Peacock served as Appalachian State University's sixth chancellor from 2004 to 2014. During his tenure, Appalachian experienced significant growth in the overall quality of its academic programs and launched new or enhanced initiatives in the areas of healthcare and the intersection of energy, the environment and economics.

Prior to his appointment as chancellor, Chancellor Peacock served at Appalachian as interim provost and executive vice chancellor. He joined the faculty in the Walker College of Business Department of Accounting in 1983, was appointed assistant dean of the Walker College in 1987, associate dean in 1989, and served as dean of the college from 1992-2003.

Chancellor Peacock was instrumental in creating the Boyles Distinguished CEO Lecture Series in 1988, and through this series has brought industry experience to campus which has allowed our students first-hand exposure to influential leaders of business.

Thelma Raley, a resident of Winter Haven, Fla. and Blowing Rock, N.C., was a successful businesswoman, civic leader and pioneer in the Florida citrus industry. As the owner of Raley Grove Properties for more than 50 years, she was recognized as one of the top women citrus growers in the South.

Raley graduated from Messer Business College and attended Florida State College for Women (now Florida State University). A mother of three, she realized a lifelong ambition when she completed her studies and received a Bachelor's degree in English from Appalachian in December 1992 at the age of 80. She made a substantial financial commitment to the Walker College of Business.