In addition, Walker College professors Scott Hunsinger, Pete Groothuis, Dana Clark and Pia Albinsson have been re-appointed to second terms of professorships they have held since 2016.

Each professorship recognizes a faculty member who has demonstrated outstanding performance in instruction, scholarship and service. The recipients receive a salary stipend to further advance their work. Each individual retains the professorship for two years.

Many of the professorships are named in honor of significant benefactors to the college.

The professorships will take effect July 1.

The recipient of the Honorable Harlan E. Boyles Professorship is Tracy Reed.

Reed is associate professor in the Department of Accounting. She joined the faculty at Appalachian in 2009, primarily teaching auditing, systems and financial accounting. Her research interests include audit performance, accountability and judgement. She serves as faculty advisor for the Epsilon Kappa Chapter of Beta Alpha Psi, an international accounting honors organization and a member of the American Accounting Association. Reed earned her MS in Accounting Information Systems from Eastern Michigan University and a PhD in Accounting from Virginia Tech University.

An endowment to fund the Boyles professorship was established in 1991 to honor the late N.C. Treasurer Harlan Boyles, who was a member of the state government for more than 49 years. The endowment is funded by contributions from Boyles' family, friends and colleagues.

Tammy Kowalczyk is a professor in the Department of Accounting who joined the faculty at Appalachian in 2005. She teaches sustainability accounting and reporting and sustainable business to undergraduates and graduates, and she is active in facilitating experiential learning opportunities for students to assist community partners implement more sustainable practices. Kowalczyk's research interests include sustainability accounting and reporting and sustainability issues in business environments. She is a member of the interdisciplinary Carbon Accounting Research Group at Appalachian, which focuses on issues associated with carbon offset accounting systems. She served as the university's sustainability academic fellow from 2015-2017 and is currently serving as an Appalachian Innovation Scholar. Kowalczyk earned an MBA from the University of Texas at Austin and a PhD in accounting from Texas A&M University.

Heather Dixon-Fowler is an associate professor in the Department of Management where she also serves as assistant department chair and entrepreneurship internship faculty supervisor. She joined the faculty at Appalachian in 2009 and has previously served as director for the center for entrepreneurship. She has taught a variety of entrepreneurship courses and has developed and led study-abroad programs to Vietnam, Cambodia and Panama and co-led trips to Spain and Malawi. Dixon-Fowler's research is primarily focused on sustainable business, social entrepreneurship, corporate social responsibility and firm governance. She earned a PhD in Business Administration with an emphasis in corporate strategy from the University of Arkansas where she also worked as part of the founding team at the Applied Sustainability Center.

Ash Morgan is a professor in the Department of Economics, having joined the faculty at Appalachian in 2008. His research interests are in environmental and natural resource economics, agricultural economics and regional economics. Much of his research is policy based, providing interested stakeholders and end-users with empirical analyses for implementation in future policy decisions. Morgan serves as director of the university's Center for Economic Research and Policy Analysis (CERPA), leading efforts to develop regional economic models to conduct economic impact analyses for local, state and regional public and private entities. He earned the Walker College's 2016 Sywassink Award for Excellence in Research and holds a PhD in Economics from the University of Delaware.

The Walker College of Business Dean's Club is an annual giving society designed to benefit our faculty and students.

Due to recent growth in our Dean's Club support, the college increased the number of Dean's Club professorships from two to three for the coming term.

Scott Hunsinger has been appointed the L.M. Baker Jr. Partners in Excellence Professor for a second term.

Hunsinger, a professor in the Department of Computer Information Systems and Supply Chain Management, joined the faculty at Appalachian in 2004. He is the faculty advisor for Alpha Iota Mu and the Association of Information Technology Professionals (AITP). He serves on multiple national boards including ISCAP (Information Systems & Computing Academic Professionals) as a director, past president of AITP-EDSIG (Education Special Interest Group of AITP), and on the CompTIA AITP executive council. He is senior editor of the Journal of Information Systems Applied Research, a member of the editorial review board for Information Systems Education Journal and has served as associate editor of three academic journals. Hunsinger received the University of North Carolina (UNC) Board of Governor's Teaching Award in 2013, the highest teaching award in the UNC System. He was awarded with the W.H. Plemmons Leadership Medallion in 2012 and received the Walker College's Sywassink Awards for Excellence for Teaching and Service in 2011 and 2015, respectively. His research interests include IT certification and predicting behavioral intention. Hunsinger earned his MBA and PhD in Information Technology from The University of North Carolina at Charlotte.

Pete Groothuis has been appointed the Beroth Oil – 4 Brothers Food Stores Professor for a second term.

A professor in the Department of Economics, Groothuis has taught at Appalachian since 2002. His professional interests include sports economics, labor economics, and environmental economics. He has authored a number of articles focused on sports labor markets as well as environmental and resource economics. Groothuis earned both a master's and Ph.D. in economics from the University of Kentucky.

Dana Clark has been re-appointed the Duane D. Daggett Professorship in Management for a second term.

In addition to teaching, Clark serves as the director of Appalachian's Hospitality and Tourism Management program. His research focuses on destination management, strategic planning and organizational marketing. Clark has taught at Appalachian for 27 years and, in 2013, earned the Walker College's Sywassink Excellence in Service Award. Clark is the only individual to win four top tourism honors in North Carolina: the Barentine Special Achievement Award, the Charles J. Parker Tourism Excellence for Public Service Award presented by the North Carolina Travel Industry Association, the Tourism Excellence Award for an individual, also presented by the North Carolina Travel Industry Association, and the Winners Circle Award presented by Visit North Carolina. Clark received his master's degree in business administration from the University of Georgia and his Ph.D. from Virginia Tech.

The professorship is named for Duane Daggett, who served as an executive in residence in the Walker College of Business from 1986 until 2000. The Daggett professorship was established by M. Lee Barnes Jr. and his wife, Christy L. Barnes.

Pia Albinsson has been appointed as the John W. Guffey Jr. Professor for a second term.

Albinsson is an associate professor in the Department of Marketing whose teaching interests include collaborative consumption, consumer activism, corporate social responsibility and advertising effectiveness. Albinsson earned the Walker College's 2018 Sywassink Award for Excellence in Research and received the 2016 China Studies Institute Zhi-Xing China Academic Leaders Fellowship. Before joining the faculty at Appalachian in 2009, Albinsson worked in the tourism industry in Greece as well as banking and finance in her native Stockholm, Sweden. Albinsson earned her MBA and her Ph.D. in business administration and marketing from New Mexico State University.

The Guffey Professorship is named for John W. Guffey Jr., retired chairman and CEO of Coltec Industries Inc., which merged with BF Goodrich in 1999. It was established in 2000 and was funded by John and Monique Guffey. 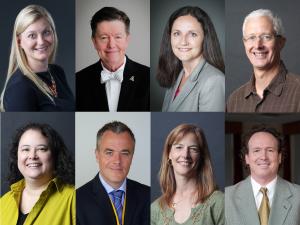 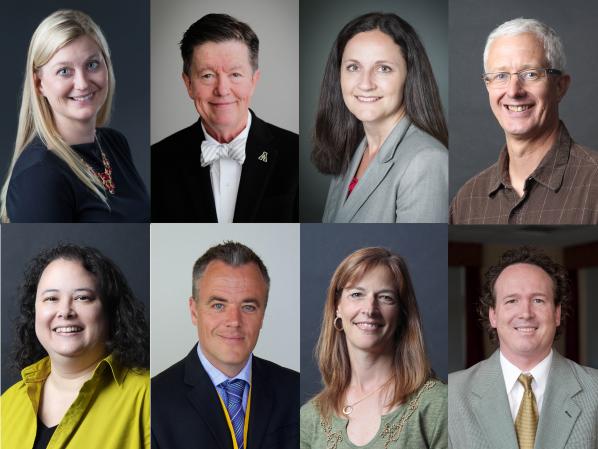