Research from Appalachian State University Professor of Economics John Whitehead recently appeared in the Forbes article, Fans Are Coming Back to The Premier League. How Much Will They Want To Pay For The Privilege?

The post, by Economist James Reade, examines how Covid-related capacity constraints impact the willingness on the part of spectators to pay more to attend events within the Premier League -- the top level of the English football league system. It concludes that fans are willing to pay more for the risk reduction associated with attending matches during Covid-19.

Reade utilized research from Dr. Whitehead and company (Brad Humphreys of West Virginia University, Gary Wagner of the University of Louisiana at Lafayette, and Pamela Wicker of Bielefeld University) which surveyed sports fans in five US cities asking their sporting preferences, their awareness of Covid-19 news and possible scenarios to attend games.

They found that a face mask requirement increased the likelihood that a fan would attend a game in the future, and this was statistically significant. They found also that imposing a 10% capacity on a stadium increased the likelihood fans would state they would attend. [The] results suggest that fans are less willing to attend if there is a concern that stadiums will be crowded.... Face coverings and greater stadium capacity reductions appear to be valued most heavily by fans - baseball fans being willing to pay almost seven times as much.

Learn more about the research in Beyond ghost games: The value of attendance with masking and social distancing in U.S. professional sport via the thirty third Reading Online Sport Economics Seminar (ROSES).

About Appalachian's Department of Economics

Appalachian's Department of Economics ranks #1 in research among all regional universities in the south and ranks among the top 100 of all U.S. economics departments. The department is particularly strong in the fields of environmental and natural resource economics, and our research has local, national, and global impact. For more information, visit economics.appstate.edu. 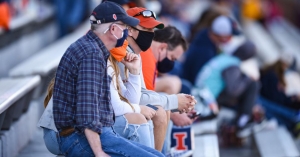 Fans wearing masks during a college football game between the Minnesota Golden Gophers and Illinois Fighting Illini on November 7, 2020 at Memorial Stadium in Champaign, ILL 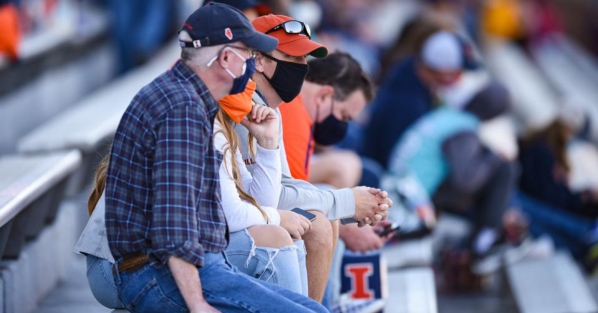